Evry (France), 17 October 2019 – Publication of half-year financial statements as at 30 June 2019, audited and adopted by the Board of Directors at today’s meeting.

The report for the first half of 2019 is available on the Global Bioenergies website, under the heading “Investors/Regulated Information”. 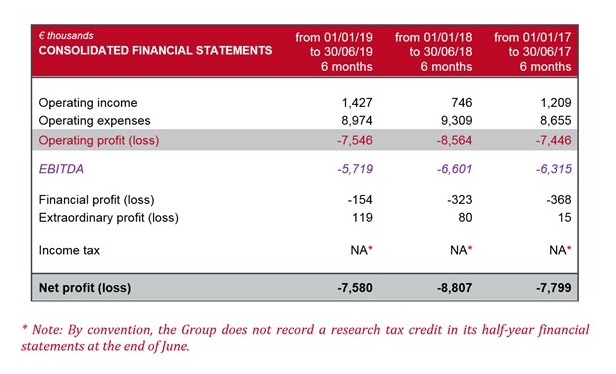 Operating income is mainly driven by the five European grants awarded to Global Bioenergies in 2017 and 2018 totalling €12 million. The first half of 2019 benefited from the effect of a “full half-year” compared with the two previous reporting periods in which projects were launched.

Operating expenses are beginning to decrease and remain impacted by the amortisation of the Leuna demo plant (€1.5 million in this half-year). As a reminder, this demo plant is being amortised over a 4-year period ending in the first half of 2021. 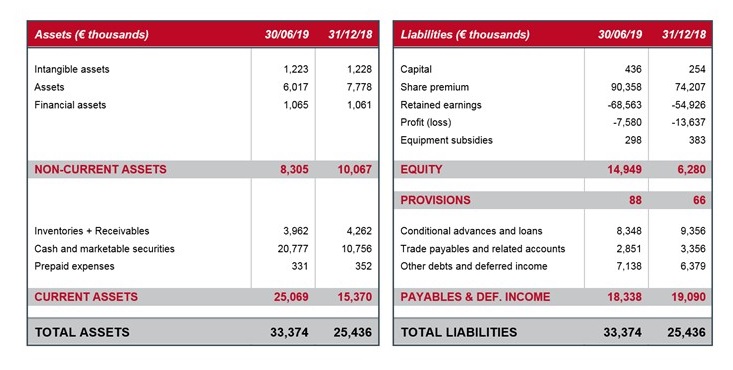 An analysis of the consolidated balance sheet reveals the following main changes:

– reduction in non-current assets resulting from the amortisation of the Leuna demo plant;

– reduction in “payables and deferred income” items, still heavily impacted by the European grants cashed in 2017 and 2018 upon initiation of the projects, which amounts still exceed the related expenses at 30 June 2019 and are therefore recorded under “deferred income” for a total of €5.7 million.

The cash flow statement mainly reflects the capital increase of €16.9 million last June, of which €590 thousand corresponding to related expenses booked on the issue premium.

Beginning of a shift towards cosmetics

The first half of 2019 was characterised by the beginning of a shift towards cosmetics. Although potential market opportunities in this industry had long been identified – as shown by the partnership entered into with L’Oréal in 2016 – recent changes have, on the one hand, increased the depth of this market which, until now, had been considered relatively thin, and, on the other, bolstered the idea that the cosmetics industry could offer significantly higher prices for isobutene derivatives than those identified in the fuel sector. These changes are related to consumer demand for natural, more environmentally-friendly products. This quest for naturalness, which can be seen across the board in many markets, is particularly visible in the area of cosmetics where there is even a sense of urgency since the sector is subject to new regulations limiting the use of certain fossil-based products. The fact that L’Oréal, world leader in cosmetics, is now the Company’s biggest shareholder is an undeniable illustration of these changes.

A capital increase operation through a public offering and removal of the preferential subscription rights was launched in June raising a total of almost €17 million. This operation resulted in 3,639,475 new shares being issued, with an investment of €7 million by the BOLD Business Opportunities for L’Oréal Development fund and that of €1.4 million by CM-CIC, sitting at the Board of Directors of the Company and which already had an 8.3% share of its equity.

A new milestone achieved in the ISOPROD project

Global Bioenergies and IBN-One achieved a milestone in July as part of the ISOPROD project funded by ADEME. As a reminder, this project focuses on the emergence of the first operating plant for the Global Bioenergies process. Achieving this milestone is evidence of the progress made on this project and will soon result in the payment of €3.1 million to the Group in the form of repayable advances.

Samuel Dubruque, Chief Financial Officer of Global Bioenergies, said: “We will continue to improve the Group’s net result in the coming half-years.”

Marc Delcourt, co-founder and Chief Executive Officer of Global Bioenergies, concluded: “Since the capital increase last June, Global Bioenergies’s stock has been under pressure: currently our market valuation is close to our cash in hand. However, the development of our process has afforded us universal recognition in the synthetic biology sector and the IBN-One plant project is one of the most innovative in this emerging industrial sector worldwide.”

Global Bioenergies is the only company in the world to have developed a conversion process for renewable resources (residual sugars, agricultural and forestry waste) into isobutene, one of the petrochemical building blocks that can be converted into ingredients for cosmetics, petrol, kerosene, LPG and plastics. Global Bioenergies continues to improve the performance of its process, conducts trials on its demo plant in Germany and is preparing the first full-sized plant in a Joint‐Venture with Cristal Union. Global Bioenergies is listed on Euronext Growth in Paris (FR0011052257 – ALGBE).