Pierre Monsan joins the Board of Directors

Evry, 28 September 2021: Global Bioenergies’ Board of Directors met yesterday and approved the H1 2021 financial statements, which have been audited by the Statutory Auditor. Global Bioenergies also announces the appointment of a new independent director, Pierre Monsan, a pioneer in French industrial biology.

Samuel Dubruque, Chief Financial Officer of Global Bioenergies, said: “The first half kicked off with the release of the first batch of cosmetic-grade natural origin isododecane produced using the process developed by Global Bioenergies . The period culminated in two major events in June:

The financial statements reflect the Group’s commitment to industrialisation and commercialisation: increased spending on isobutene and derivatives production, new expenditure items on the design and manufacture of finished products, booking of the value of the corresponding inventories, etc. The demonstration that the green isododecane produced by the Company can be used in cosmetics is now achieved thanks to the launch of the LAST brand. Our aim is now to focus on generating revenues from the sale of isododecane to big names of the industry.”

Marc Delcourt, Chief Executive Officer and co-founder of Global Bioenergies, explained: “At a technical level, H1 2021 was dedicated to developing our historical process towards a two-step variation. This alternative allows us to use tollers for the first step by taking advantage of large-scale fermenters already installed: a test on a 180 m³ fermenter – 36 times larger than our Leuna fermenter – was successfully carried out in spring. The second step must always be conducted in a specific fermenter as designed by Global Bioenergies. Given that this step is very productive, a small fermenter corresponding to a limited investment can be used. This process variation will allow us to accelerate the scale-up of our production volume in order to reach the cosmetics market before reaching the materials and aviation biofuel markets.”

* Note: by convention, the Group does not record a research tax credit in its half-year financial statements at the end of June.

Operating expenses reflect a sharp rise in “Industrialisation/Commercialisation” costs (by 1.75x, including the rise in the inventory of isobutene IBN and its derivatives isododecane IDD and isohexadecane IHD) and a reduction by around 15% in other expenditure items.

Breaking down the “Industrialisation/Commercialisation” item shows the changing nature of expenses between H1 2019 and H1 2021. First half 2021 saw an increase in isobutene production expenditure due to the scale-up of the “two-step” process (see below under “Highlights of the period”). Part of the increase is also due to the downstream production chain to convert isobutene into cosmetic-grade isododecane, which began to incur expenditure from the second half of 2020. Lastly, expenditure on rolling out the LAST brand is also included in this item: product design and manufacture, technical and regulatory studies, communication and marketing, etc. 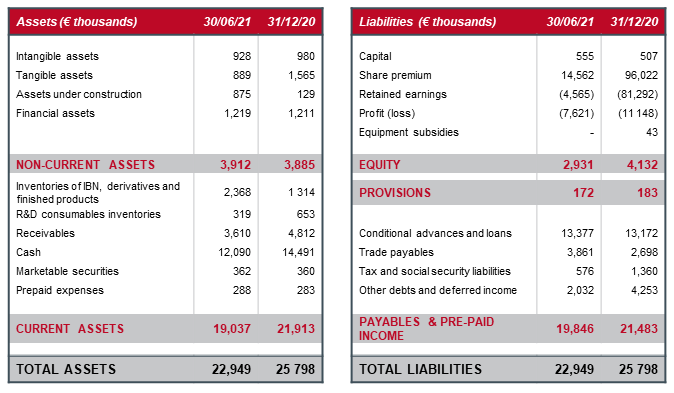 Assets: assets under construction increased due to the decision announced in May to transfer the Leuna demonstrator’s main units to the Pomacle site. Inventories of isobutene, derivatives and finished products increased due to the increased production rate, the introduction of the two-step process and the launch of the LAST brand on 14 June. Gross cash decreased by €2.4 million between 31/12/2020 and 30/06/2021.

Liabilities: the negative retained earnings balance was allocated to additional paid-in capital by resolution of the General Meeting of Shareholders on 18 June 2021. This accounting manoeuvre, which has no impact on equity, clarifies the presentation of the accounts and facilitates access to public financing. Other payables and deferred income were reduced by the transfer of intercompany payables (between Global Bioenergies SA and Global Bioenergies GmbH) to Global Bioenergies GmbH’s current account and the recognition of income from grants, which reduced the amount of deferred income.

Release of the first batch of cosmetic-grade isododecane

2021 kicked off with the release of the very first batch of cosmetic-grade natural origin isododecane produced using the process developed by Global Bioenergies. Isododecane is a derivative of isobutene. The molecule is no stranger to the cosmetics industry; it is valued for its emollient properties and technical characteristics, in particular (i) its excellent ability to dissolve the ingredients of a given formulation and (ii) its volatility, which offers an ideal ratio between application and drying times.

Widely used for skincare and haircare products, isododecane is also the flagship molecule for “longwear” make-up. This make-up segment combines waterproof effect, longwear and low-transfer performance. The corresponding market is around one billion units sold per year, i.e. a quarter of the global make-up market. Isododecane can represent up to 50% of the total volume of ingredients used in these products.

The prospect of replacing synthetic isododecane with natural origin isododecane is an unexpected opportunity for the cosmetics industry, which is more deeply committed than ever to seeking naturalness in its products.

To illustrate its innovative offer, the Company has decided to focus on this “longwear” make-up specificity and its special dependence on isododecane. The fact that isododecane is the main ingredient in longwear formulations has until now prevented the segment from achieving a high naturalness. Global Bioenergies aimed to bring to market the first longwear make-up brand to combine naturalness of over 90% with the unique technical performance of isododecane. Through this claim, the Company intends to trigger a trend among the sector’s big manufacturers to switch to its natural origin isododecane. In other words, Global Bioenergies could use its home brand to drive the industry toward a new standard.

The Company has put together an experienced team with the skills to successfully launch the new brand, including expertise in marketing and communication, formulation, regulations, packaging, production and logistics, e-commerce, etc., all designed to minimise the carbon footprint of products manufactured in France. An initial range of 18 mascara, eyebrow mascara and eye shadow products has been developed in record time, spurred by the ambition of achieving “naturalness without sacrificing performance”. Blind consumer trials carried out prior to market launch confirmed the products meet this aim: without knowing the degree of naturalness of the products they were testing, 64% of the women in the trial groups thought the eye shadow products were better than the ones they usually use.

Following these results, on 14 June 2021 the LAST brand was launched via a dedicated
e-commerce website: www.colors-that-last.com. In September, the eyecare range was expanded to include 14 lipstick products offering the same degree of naturalness and technical features. This brand acts as a showcase for the Company’s technology extolling the merits of the isobutene bioproduction process developed over the years by Global Bioenergies. LAST is therefore not an end but a beginning: the aim now is to spread the technology to the sector’s other players.

Changes in the isododecane production process

The Company has therefore worked to increase its short-term production capacity through changes in its process. By splitting it in two successive steps, it is possible to use existing fermentation capacity for the first step and therefore run non-specific fermenters at full-scale fermentation volumes. This improvement makes the manufacturing process more flexible. The second step still requires the use of a specific fermenter like those already designed by Global Bioenergies in Leuna and Pomacle. As this step is highly productive, it only requires a reduced reaction volume compared to the first stage.

An initial first-step trial on a full-scale fermenter – 180 m3, , i.e. 36 times bigger than the 5 m3 Leuna demonstrator – was run in May 2021 at the Pomacle ARD facility. This represented a historical turning point: until now, it was assumed only a new plant built around specific fermenters could be used for large-scale production. This latest development means we will be able to use tollers for the first stage of fermentation. It was subsequently decided that the 5 m3 fermenter used in the Leuna demonstrator in Germany would be transferred to Pomacle by the end of the year, so that the entire two-step process could be carried out at a single site by a single team.

One of the Company’s ambitions is to give the world an additional solution in the area of biofuels. Badly hit by the COVID-19 crisis, the aviation sector must now meet another major challenge: limiting its carbon footprint. As the solutions implemented in the automotive industry are not suitable for air transport, innovation is the only way forward. Global Bioenergies has achieved in June 2021 a world first by fuelling a piston-engine aircraft that flew from Sarrebruck, Germany, to Reims, France, with over 97% renewable fuel prepared from isobutene produced by Global Bioenergies using its innovative process.

Through his career, Pierre Monsan has developed expertise in catalysis and enzymatic molecular engineering, publishing over 250 scientific publications, three books and 65 patents. After co-founding BioEurope (Solabia group) (1984), BioTrade (1996) and Génibio (1998), in 2012 he created the Toulouse White Biotechnology (TWB) pre-industrial demonstrator.

Pierre Monsan acts as adviser to a number of major groups in the food industry, chemicals and cosmetics. He is a member of a number of associations and organisations such as the Académie des Technologies, the National Academy of Agriculture, the College of Fellows of the American Institute for Medical and Biological Engineering and Honorary President of the French Biotechnology Federation. He is also an professor emeritus at INSA Toulouse and a former professor at the Ecole des Mines ParisTech. Finally, Pierre Monsan is a Knight of the French Ordre du Mérite and Légion d’Honneur and an Officer of the Palmes Académiques.

Pierre Monsan made the following comments: “I have been following the Global Bioenergies project closely since its inception. The Company has created a truly unique technology that borrows from biology as well as from petrochemicals, which clearly deserves its qualification of “Deep Tech”. My role will be to help develop this technology, first of all, in cosmetics, and then biofuels, particularly sustainable aviation fuels, so that it fulfils its promise to significantly impact the environment by reducing our CO2 emissions.”

Marc Delcourt, Chief Executive Officer of Global Bioenergies, explained: “Pierre Monsan has written several chapters of the history of global industrial biology. We are lucky to have him on board to help us write our next chapter, which will push back the boundaries of the field. Also, a big thank-you to Nicolas Cordier for his commitment to preparing for the launch of the LAST brand. Mission accomplished!”

Nicolas Cordier, who leaves the Board, made the following comments: “Thank you for this enriching adventure at Global Bioenergies and this uplifting stage of the commercial launch of the LAST brand. I wish the Group the best of success in the upcoming phases of its development, which I shall not fail to follow closely.”

Global Bioenergies has developed a process to convert plant-derived resources into a key family of ingredients used in the cosmetics industry. The process was first developed in a laboratory, where the Company is further enhancing performance. It now operates as a pilot and a demo plant, with the capacity to start breaking into the market, initially through the Company’s longwear home make-up brand, launched in 2021. The Company is gradually expanding its production capacities and is looking to improve the environmental footprint of not only the cosmetics industry but also that of other areas such as transportation and materials. Global Bioenergies is listed on Euronext Growth Paris (FR0011052257 – ALGBE)

Receive information about Global Bioenergies directly by subscribing to our news feed on www.global-bioenergies.com