Paris, 26 September 2022: Global Bioenergies’ Board of Directors met today and approved the H1 2022 financial statements, which have been audited by the Statutory Auditor and present a smaller loss than in previous years.

Samuel Dubruque, Chief Financial Officer of Global Bioenergies, said: “The recorded loss is significantly lower than last year, due to a reduction in expenses of almost €3 million compared to the first half of 2021. The first half was a period of transition for the Group between the end of production at Leuna and the construction of the new Pomacle unit. The revenue generated by these activities will be recognised upon delivery of the first batch of Isonaturane® 12 in the first quarter of 2023. Delivery of two further batches is already foreseen for 2023: Global Bioenergies is fully committed to the commercialisation of its process.”

Marc Delcourt, co-founder and CEO of Global Bioenergies, explained: “Every tonne of Isonaturane® 12 produced and sold will bring naturalness to nearly 500,000 make-up products. This market offers ideal conditions for the roll-out of our technology: prices are high and there is a strong appetite for natural ingredients. We are already working towards the next horizon of building a plant capable of producing 2,000 tonnes of isobutene and derivatives per year by 2025, which will enable us to reach all cosmetics markets, and also to explore opportunities in the road and aviation fuel markets, among others.”

* By convention, the Group does not record a research tax credit in its half-year financial statements at the end of June.

The greatest changes in operating expenses can be found in the “Industrialisation/Commercialisation” line, details of which are provided below: 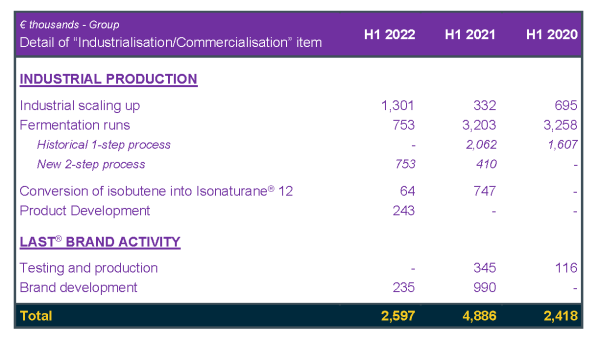 The Leuna demo plant was dismantled when the operating agreement ended in July 2021 after
4 years in service. The main units were relocated to the Pomacle site in France for the second step of the new production process, while the first step, which consists of producing DMA – the precursor of isobutene – was carried out by tollers, leading to an increase in inventories of more than half a million euros.

A smaller quantity of isobutene was converted into Isonaturane® 12 compared to the first half of 2021, the period during which the conversion process was developed.

Work also focused on the development of products for marketing, including regulatory aspects. LAST® brand expenses relate to sales and marketing activities only. 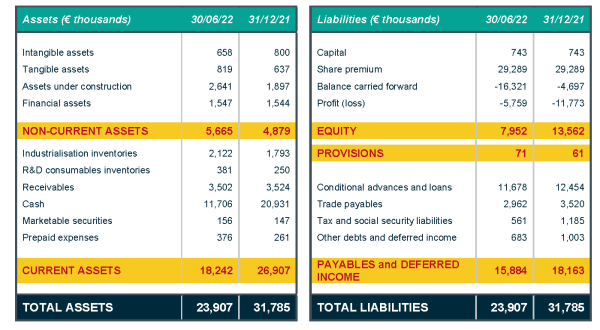 Assets: fixed assets increased due to the work carried out at the Pomacle site. Inventories increased mainly as a result of DMA production operations.

Cash and cash equivalents decreased by €9.3 million during the period. Cash flow from operations changed by €7.3 million, including an increase of just under €2 million in working capital (increase in inventories, flat receivables, reduction in payables). The additional outflows of
€2 million correspond to works at the Pomacle site and debt repayment.

Liabilities: all liability items decreased. The Group no longer has any deferred income from publicly funded projects.

The very first orders for Isonaturane® 12 placed in June by several major cosmetics companies, including L’Oréal, were undoubtedly the most significant development of the first half of the year.

A commercially focused process was implemented for the first time since the creation of the Company: this is a major step forward for Global Bioenergies, reflecting the desire of industry players to find ever more environmentally friendly solutions. These orders follow a customer referencing process carried out over several months, which included sending out samples for testing. Delivery of these initial orders is scheduled for early next year.

Global Bioenergies’ Isonaturane® 12 stands out in the world of cosmetic ingredients for its particularly high selling price. The fact that it is the first cosmetic grade isododecane of natural origin gives it a very high added value. This molecule, traditionally derived from oil, is essential for longwear, water-resistant and low transfer make-up. When incorporated to achieve these characteristics, it is the main ingredient, representing between 25% and 50% of the formulation.

Isonaturane® 12 thus opens the way to naturalness in the so-called “longwear” make-up segment, which represents a quarter of the global make-up market. The selling price of Isonaturane® 12 benefits from the specific characteristics of the make-up sector:

The business model for the upcoming periods will therefore be based on an operating chain capable of producing several dozen tonnes of Isonaturane® 12 per year from plant-derived and renewable resources, corresponding to annual revenue of several million euros.

Horizon 1: Organisation of the LAST® business

The development and launch in June 2021 of the LAST® brand – the first make-up brand in the world to incorporate Isonaturane® 12 and thereby enable the combination of naturalness and longwear performance – required the enlisting of external expertise.

After witnessing a successful launch, the choice was made to bring the functions required for the deployment of the brand in-house: sales, communication, digital marketing, and so on. A director was hired to lead this team of five people, increase awareness of the LAST® brand, boost sales and balance the ratio of expenses to revenue. This organisation resulted in a significant reduction in costs compared to 2021.

In February, the team was awarded the prestigious Prix d’Excellence France award in the “Research and Innovation” category by Marie-Claire magazine, whose jury chose to recognise LAST® for its make-up combining performance and naturalness.

Horizon 2: Construction of the new isobutene production unit in Pomacle

In 2021, Global Bioenergies switched to using generic fermenters for the majority of its process that were much larger than the two fermenters it had previously used. Only the final step, the conversion of the isobutene precursor – DMA – into isobutene, still requires a specific fermenter.

The decision was therefore taken to develop a commercial production chain at the Pomacle site using this so-called “two-step” process. The engineering studies and preparatory work carried out at the end of 2021 gave way to the actual construction and integration work, which took place in the first half of 2022. The very first batches of “two-step” isobutene were produced in March using the 0.5 m3 fermenter installed on site since 2015, prior to the connection of the 5 m3 fermenter from Leuna, which will soon increase the unit’s production capacity tenfold.

A portion of the isobutene derived from this new process will then be converted into Isonaturane® 12 by a chain of tollers, with the remainder being used to explore other applications, including road and aviation fuels.

Engineering studies were carried out simultaneously during the first half of 2022 in order to define the industrial process for the 2,000-tonne plant and ensure its robustness. Experimental validation work was carried out for the key steps. A model was developed to ensure that they could be extrapolated to a larger scale.

The mass and energy balances of the process were developed, challenged and optimised. This entailed a sequence of unit operations, selected on the basis of technical and environmental performance criteria. The Company has hired an engineering firm to carry out the preliminary design of the plant.

Horizon 4: Breaking into the fuel markets

The commercial opportunities for isobutene and its derivatives are not limited to Isonaturane® 12. Of course, this route offers the greatest potential in terms of pricing. However, isobutene was identified at the time of the Company’s creation because of the many markets in which it could be used: cosmetics, fuels, plastics, rubbers, fine chemicals, etc. The economic equation only functions today in the cosmetics market, we can nonetheless see a growing interest among all industry sectors in accessing raw materials with a better environmental profile.

The huge fuel market – characterised by both high volumes and low prices – also has a need to limit its carbon footprint, particularly in the aviation sector. The Company expects to have its aviation process certified within the next six months. There are very few solutions in this field: only seven technologies worldwide have been certified to date. Several oil companies have approached Global Bioenergies in recent months, including giants Shell and Repsol, reflecting a growing interest in the Company’s solutions and potential. Efforts to improve the process will still be necessary in order to bring it to the level of cost required in the fuels sector.

Global Bioenergies converts plant-derived resources into compounds used in the cosmetics industry, as well as the energy and materials sectors. After launching the first long-lasting and natural make-up brand LAST® in 2021, Global Bioenergies is now marketing Isonaturane® 12, its key ingredient, to major cosmetics companies to improve the naturalness of their formulas whilst improving their carbon footprint. In the long run, Global Bioenergies is also aiming at cutting CO2 emissions in the aviation and road sector and thereby curb global warming. Global Bioenergies is listed on Euronext Growth Paris (FR0011052257 – ALGBE).

Receive information about Global Bioenergies directly by subscribing to our news feed on www.global-bioenergies.com

Manage cookie consent
To provide the best experiences, we use technologies such as cookies to store and/or access device information. Consenting to these technologies will allow us to process data such as browsing behavior or unique IDs on this site. Not consenting or withdrawing consent may adversely affect certain features and functions.
Manage options Manage services Manage vendors Read more about these purposes
View preferences
{title} {title} {title}